Record breaking round recorded at the West of England U16's Championship 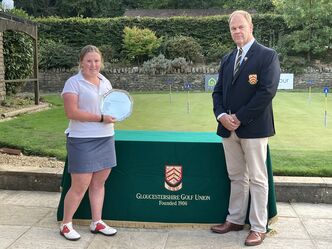 Hot on the heels of hosting the County Seniors Championship at the beginning of August, Lilley Brook Golf Club hosted the West of England Junior Open on Sunday 20th September. The weekend saw opportunities for the strongest young players in Gloucestershire to compete against the best young players in the rest of the country.

The Ken Newman Salver, named after one of Gloucestershire’s most loved Junior Organisers, is a contest for boys and girls and for this course had a score balancing adjustment with girls’ scores reduced by two shots per round. Year-on-year, our standard of players is getting stronger, and the 60 competitors this year had a maximum handicap of just 3.7.

The winner this year was 15-year-old Harriet Lockley from the Isle of Wedmore Golf Club in Somerset. Harriet returned a two-round total of 141 (adjusted to 137) to take the title by two shots from Luke Perkins of Frilford Heath in Oxfordshire.

Having returned a three over par 75 in the morning round, Harriet bounced back with an incredible six under par 66 in round two, and in so doing established an incredible new course record at Lilley Brook.

Starting at the 9th hole, Harriet’s record-breaking round started with two consecutive birdie three’s, quickly followed by an eagle three at the par 5 12th (her fourth hole) and another birdie at the short par 4 13th. The pressure was on, but an impressive two-under par back nine saw her home. Due to her age, she will be able to compete again next year and contest her title.

Meanwhile, runner-up Luke shot two superb scores of 69 and 70 against a very strict par of 69. His morning game was the model of consistency with just two birdies and two bogeys alongside fourteen pars. Unfortunately, he had a tricky spell at the start of his back nine, but he finished the round off strong with three pars and a birdie at the 6th (his 16th).

2020 has been an incredible year for our own Milan Reed from Long Ashton, and this event was no exception as he finished in 3rd place on 141 (72, 69). Milan played with his usual control all day long, and will surely be pressing for a place in the County Men’s 1st Team in 2021.

Long Ashton was also represented by Louis Ross, who played excellently to finish in a tie for 6th place alongside Joe Jones from Langland Bay in Wales. In joint 4th place were Monty Holcombe (Walton Heath) and Aidan Millham (Windlesham). Aidan returned a boys’ best of the day with an impressive 68 in the morning.

It was fantastic to see so many enthusiastic young players out enjoying our wonderful game in what has been the strangest of years, and Lilley Brook Golf Club was a superb host of the event, becoming the first club to stage the West of England Junior Open twice after hosting previously in 2015.

The volunteers who have worked so hard to put these events on around the country deserve nothing but praise, and that includes our very own Championship team of administrators and referees. We’re all very proud of you!

You can view the full results table here